Back to the grind

Oh, you mean I can't go back to bed this morning? Whose idea was it to torture me like this!? Yesterday morning I got out of bed at 8am, made blueberry pancakes and coffee, and less than two hours later, Pippi and I laid back down and slept for another two hours. I want vacation back!

Also, it is my lifelong goal to learn to surf. Hopefully someday this will be Pippi.


"Wow, that guy's an asshole. Seriously, I want to punch him in the face."

...I certainly wish I had, believe me. I am kind of sad you had no worst date story, though, but I'm also glad you found your man so young. I'm envious!


"Wow, that guy deserves a gold star in the asshole hall of fame"

Oh believe me, if such a hall exists, he's there. I also am sure the dude who dumped you after ordering dinner, but before the food arrived is there also.


As far as pets go, aside from dogs, people mentioned wanting a pet pig, a seal, "no pet", and...a capybara. I admit, I had to look up that last one. In case you're curious, here's a picture of this totally rad looking animal 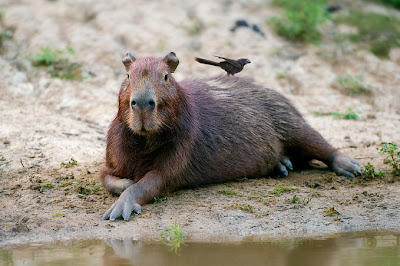 Also, it seems like having one as a pet isn't too much of a dream. I also found this little gem: 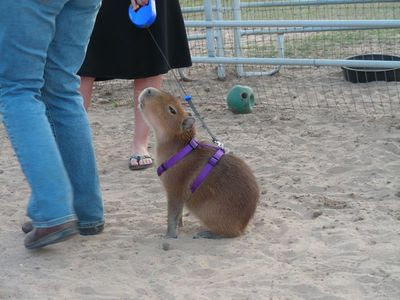 I don't know why, but I'm reminded of this right now


Also, you guys, while at the beach, a commercial came on TV that made me want to scream. Have you ever seen the FlexBelt? So ridiculous! I officially add this to my crazy workout devices list.

I apologize for the complete randomness, but my brain is slowly warming back up. I'll have a vacation recap soon. For now, It's time to dive head-first into my work emails. I have a feeling it's going to be a busy day.

Did I miss anything fun/amazing/otherwise fantastic while I was away?
(I haven't had time to catch up on blog goings-on yet.)