What's in a name?

By now, you all know about Pippi, my Yoda-eared dog. 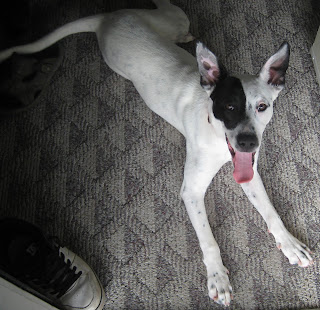 She's cute, she's finally (I think) mastered house-training, and everyone has an opinion about what breeds she is comprised of. I always wanted a dog that was so much of a mutt, no one knew exactly what different breeds were in its lineage and, folks, without actually trying, I found her!

While we were at the beach, it became apparent that I'm going to be asked everywhere I go what type of dog she is. One guy goes, "oh, she's the spuds mackenzie breed." (No, that's not an actual breed name. He was referring to the bull terrier). My opinion is that she isn't mixed with this breed, but who knows. 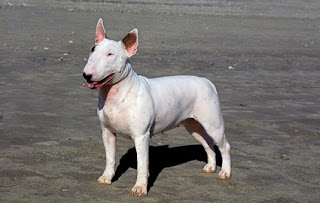 In her adoption ad, I was told that she is a mix of English Pointer, Boxer, and Labrador Retriever.

I've decided that, when writing the adoption descriptions, organizations will pretty much write any dog breed when they don't know for sure. Also, "Lab" is their fallback breed. Don't know what type of dog it is? Must be a lab mix. This is especially prevalent when the dog looks suspiciously like a pit bull. Why do these people want misinformed idiots adopting the dogs?

Anyhow, when I took Pippi to the vet they noticed she has the under bite of a Boxer, so I suppose it's a possibility she's actually mixed with Boxer. I guess she could be mixed with Pointer because of the spots, although I have my doubts. I would bet a million bucks there is no lab in this girl, though (and I'm not a betting woman).

My family all had their ideas this past weekend...

Personally, I think any of these is possible, but really anything is possible. She'll go through her life with people wanting to label her all kinds of breeds, but I don't mind not knowing. I prefer it to be a mystery. 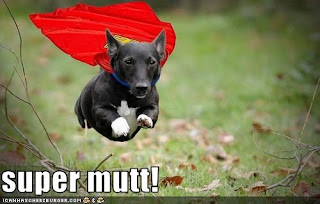 ...and when people ask from now on, that shall be my answer.

Also, I realized one day while watching Jeopardy (yes, my love of Jeopardy along with my love of naps has me thinking I'm going to be awesome at retirement), that I unknowingly named Pippi well. I know this is in the wrong order by Jeopardy's standards, but the gist is:


Q: What is the name of the dots on a pair of dice called?

A: Those dots are called "pips." The dots on dominoes go by the same name.
{source}

I actually named her after another dog that I had sent in an application for, but was denied because I am gone for 8+ hours a day (excuuuuse me for having a job). My friend and I were bouncing names off each other one night and I ended up with Pippi or Dixie. I then realized that the shortened version of Dixie is "Dicks" and decided to go with Pippi.