Just had to share a little bit of funny before getting into the nitty gritty.


Dog training is a ridiculous process. Ridiculous, I tell you. Trainer Ryan said there will be days when it seems like you're sliding backwards in the process, but FOR THE LOVE why can't it just be that Pippi decides, you know what, today I don't want to give you my paw to shake.

We're currently working on being nice to strangers. She's supposed to sit for greeting and keep her butt on the ground and just let them pet her. Simple enough, right? Yesterday on our walk a group of kids wanted to pet her and ask me questions about her. No problem. She walked up to them, sat down, handed them her paw, and tried to lick their faces. When she was done, she walked away. It was something I'd only dreamed about. I was so ridiculously happy with her. I thought we are finally turning a corner with this people thing. 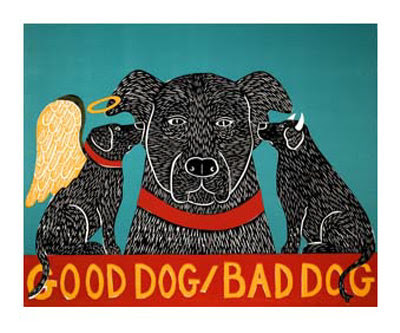 This morning I just happened to walk her at the same time people were walking their kids to the bus stop and she was getting spooked by everyone and barking like she wanted to get at their throats.  Seriously, dog? Just when I was starting to think you were learning! If it were a different circumstance and people weren't on a time table to get their kids to school on time, I may have done the, "Hi, I'm trying to teach my dog to sit for greeting. Would you mind helping us out...?" and then she would sit and be nice because, dude, what's better than a stale dog treat and someone paying attention to me!!? I guess, until we get the hang of this stranger thing, she's just going to scare the shit out of people if it's not a good time for them to pay attention to her and hand her a treat.

So, this brings me to another story that happened in training class this weekend. We were walking around the store, working on the "heel" and "wait" commands and a guy startled Pippi and she barked. Instead of not being a douche bag and either walking away or giving her a minute to understand he's not a threat, he leaned down and shoved a fist in her face which I guess was his way of saying hi to a dog. Pippi don't play that game. She growled at him and showed her teeth and I pulled her away and walked the other direction. He then went to Trainer Ryan (who saw the whole thing) and said the guy tried to say Pippi bit him. Ryan told me Pippi did nothing wrong, that it was the guy's fault, so I was right in not scolding her in that circumstance.

Other than these slip-ups, we're doing pretty good with other parts of training. Now, "on your bed" results in Pippi running over and plopping down on her bed all excited. I can even knock on the door without her barking every. single. time. Small victories, I guess. Thank goodness for those.

I have another run scheduled with Mike today after work. Hopefully I won't slow him down too much again. He mapped the route this time and promised me there's only one substantial hill. We'll see.