Today I am thankful that I have friends who aren't afraid to tell me when I'm being an idiot. Sometimes I think living alone and having no one to talk things through with on a daily basis is warping my brain.

Pippi is only a good listener when I'm rubbing her belly, but she's not so good at giving advice.

Speaking of Pippi, we had another training class last night, at which Instructor Ryan kept telling me, "she's really improving." (each time he said it, I wanted to cry happy tears). Ryan always brings one of his dogs and last night he brought his pit bull, who weighs twice as much as Pippi. At one point, after she growled at him a few times, he snarled at her and she backed down. I gave him a treat to thank him. She got to the point where she and the two other dogs were playing nice together ON leash. It's the little things in life. She CAN be taught!

Next Thursday is our last puppy class and this Saturday we're starting the intermediate classes. Ryan thinks she's ready. 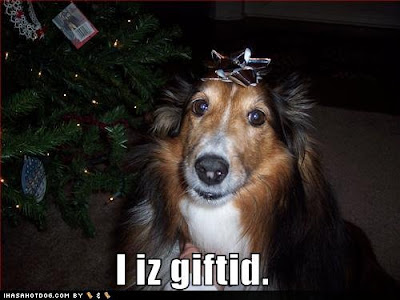 So, to sum up: My dog is smarter than me.