I've kept my clothing and "fun" purchases to two categories, "needs" and "really really on sale, so I can't pass it up". Also, I'm trying to save up for a girls' weekend to the new outlet mall (in three weeks!), where I am hoping to purchase a Coach purse for a really really good price. In order to justify this purchase, I used the purse I bought a year ago (for under $20 at New York and Company) until it literally came apart and purchased a really cheap one at Kohl's (which is already coming apart!) to last until our trip. Also, I've never owned a "grown-up" purse. I think it's time.

My first purchase came from a thrift shop in Chapel Hill called Time After Time. I had some time to kill before yoga one evening, so I decided to look around. They have a gigantic bowl full of bracelets for $3.00 each, so I spent a whopping $9.00 on these three. I'll definitely be back there to raid that bowl some more!


The next purchase was from Bath & Body Works. They had a promotion where you could buy three of the small lotions for $10.00 and then I had a coupon for a free large lotion with any purchase of $10.00 or more, so *ta da*! Also, a few weeks prior, I got the other large lotion on a major sale for something like $2.50 (marked down from $10.50!) I normally don't use smelly lotions, but on days where I work out after work, I find it better, on the car ride home, to smell good than to smell...well,not good.


And now, onto the "needs" purchases.

In my current gym shoes (or running shoes, or sneakers, or whatever you call them), I had been getting blisters all over my feet, in areas I normally don't get blisters, like the ball of my foot (ouch!) So I did the math and decided it had been almost a year since I bought them, so it was probably time to buy a new pair. I went ahead and bought the same kind, but the upgraded version (upgraded=same shoe, more awesomer colors). These give me blisters, too, but I'm hoping it's just because they need to be worn-in.

The right shoe in my previous pair had a squeak in it since I bought them and it drove me nuts. When I got this new pair, I switched over my outdated Superfeet insoles (yes, they really are that expensive, hence the "outdated") as I normally do, put them on, and BOTH shoes squeaked! I was more than a little peeved. After wearing them once and getting blisters (ugh!) I decided to just put in the insoles the shoes came with, in an attempt to quell the blisters, and the squeaking stopped! Do I feel like a big dummy? Yes, yes I do.
My final purchase is in the form of socks. I have looked everywhere imaginable for thick cushion socks that have the tab on the back to keep your shoes from rubbing the back of your ankle. EVERYWHERE! After probably a year and a half of purchasing socks that didn't fit the bill, and endless searching, I finally found some, they are cool colors! Double yay!

That's all for now. I hope to follow this up with the purchase of that awesome purse from the Coach outlet. We'll see...


P.S. After yoga last week I got home, took the clips out of my hair, and realized my "yoga hair" was too fun to not document. Why can't I style it like this myself? 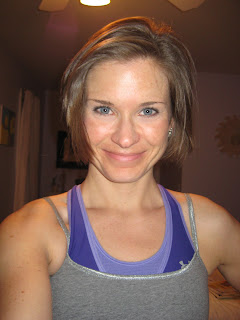