Every year, The School of Government at UNC-Chapel Hill (aka-the place I work as a graphic designer of the most awesomest designs in the universe ;-), has an Annual Awards and Service Celebration luncheon, where everyone comes together to enjoy a catered lunch and we celebrate the work of all employees. Also, awards are given out.

The awards are:
All awards are earned through nominations by coworkers.

Are you ready for the fun part?

Are you suuuuuure you're ready?? 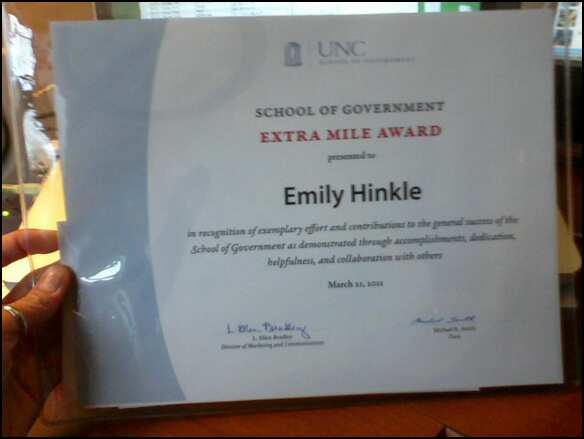 I couldn't believe it! I am still sort of in shock (in a good way :). I always just assume people think of me as 'that girl who designs things', but *ta da*! I guess you could say I was super-duper surprised and excited. The marketing division (which is comprised of me and my three immediate coworkers; one of which is my boss), put together all of the materials; certificates, program, nomination forms, and digital sign images, for the event. That means they worked super hard at keeping this a secret from me. It worked!

The text at the bottoms reads:
"in recognition of exemplary effort and contributions to the general success of the School of Government as demonstrated through accomplishments, dedication, helpfulness, and cooperation with others."

...and yes, I received a hefty check of a little more than $600 after taxes, which I've spent about twenty times over in my head (but haven't actually spent it yet. I'm waiting until after my paycheck hits tomorrow and before I pay my bills to think, "wow, It's been a long time since I've had that much money in my account!") And then I'll have to pay my bills and I may actually spend part of my winnings on a few things I've been wanting but couldn't afford (like new gym shorts and a pedicure...I like to live large :-).

For some reason i was thinking I was going to get maybe $150. I asked my boss how much the check was for and when she told me, after the shock wore off, I said to her, "I can pay off my credit card!" Yeah, I know, the dumbest thing to think about and then to tell your boss. Oh well. (I do not plan to use it to pay off my credit card. My mom always told me that when you get a gift of money, you should use it on something for you. Thank you, Mom!)

This morning in my mailbox at work, I received the nominations in an envelope. It was a thick envelope with my name on it and I was hoping it wasn't, like, all the hate mail I've accumulated or something. It wasn't. Guess what. I received five nominations. FIVE! As in the number after four. As in one, two, three, four, five! I definitely owe it to my coworkers for receiving such an honor. Three of the nominations were for the award that I received and two were for a different award.